I love me some cheesecake.  I try not to eat a whole lot of it because, well, I don’t need all the calories!  But this is a very tasty recipe that got the compliment that I should be selling it.  I’ll take that!

This was the first time using my spring-form pan, which worked beautifully.  Be sure to read through thoroughly and at then end, you’ll find tips on how to keep your cheesecake from cracking in the middle – a very common problem for everyone. 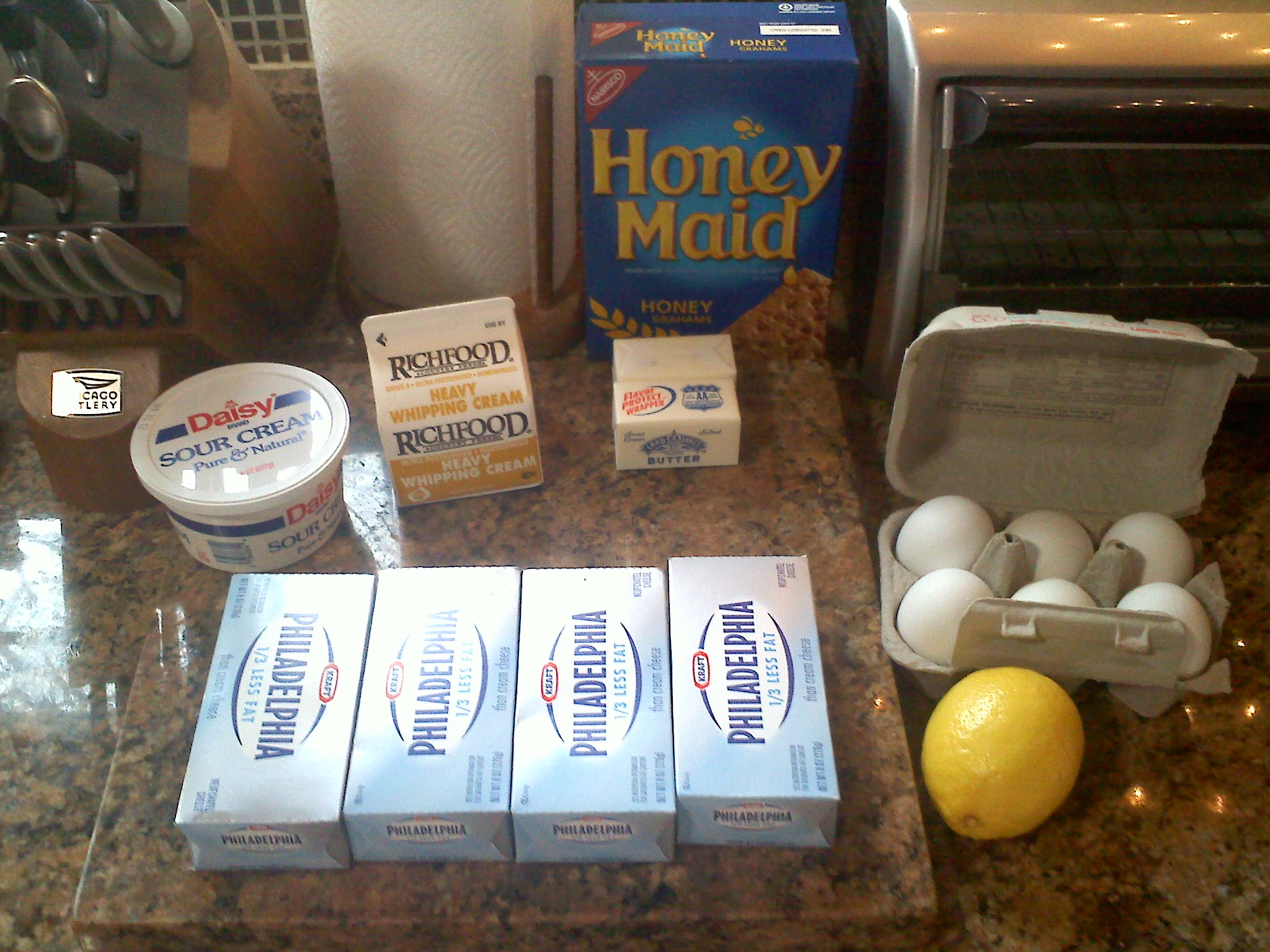 Preheat oven to 325°.  I’ll say here that having a standing mixes is much easier than using any other method.  Also, this recipe will fill a 9″ diameter, 3″ deep spring-form pan.  If you are going to use something smaller, like a standard round cake pan – divide the recipe in half, or make mini cheesecakes in a muffin tin with the excess.

Mix together the cream cheese, sour cream, heavy cream, sugar, flour, and vanilla extract.  Once it becomes smooth, add the eggs – one at a time, scraping the sides of the bowl.  Try to avoid beating air into the mixture.  At the end, mix in the juice of the lemon. 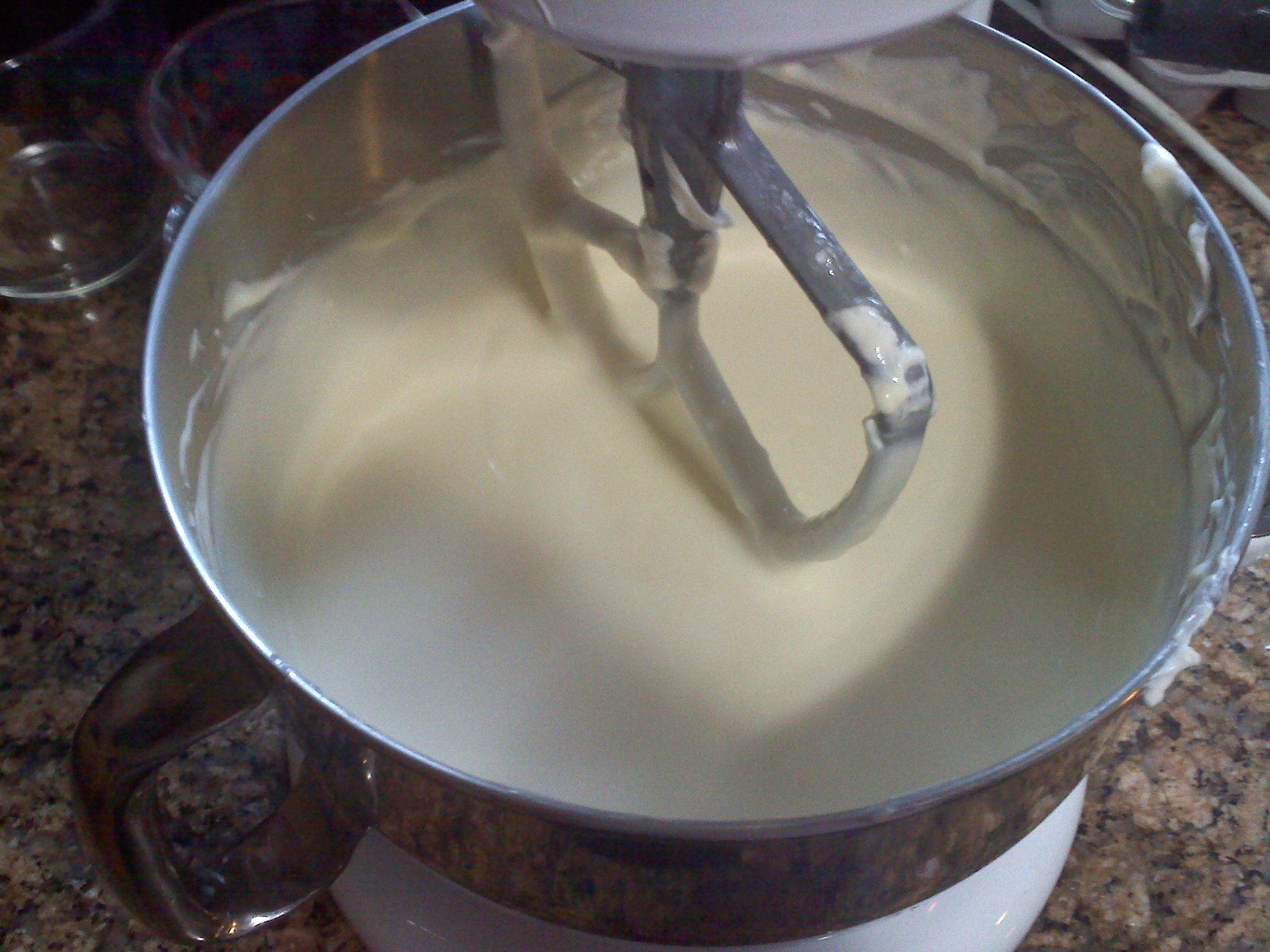 END_OF_DOCUMENT_TOKEN_TO_BE_REPLACED

Back in December of 2008, I packed up my house of stuff and the majority of it has been sitting in storage ever since.  This past week, I finally got all the boxes labeled “kitchen” and a few others that weren’t labeled at all, out of storage and into my new home.  I haven’t been able to go through all of them yet, but thus far have at least found a lot of my baking gear (YAY!) and some things that I am planning on giving over to a good friend of mine – Geek Girl.  Some of it will go to Goodwill for a donation – how many dishes and mugs do one household really need?

One item that I was super stoked to find is my garlic press.  While it’s not exactly that hard to mince or chop garlic, I’m technically lazy.  *smile*  And I finally have all my measuring cups and spoons, which makes baking more easier.  Yeah, this house had two men living in it but lacking quite a bit on cooking/baking gear that I think every house should have.

Of course, I also found my ‘man’ cake pan … which I have no idea if it’ll ever get used again.  There’s also the ‘winnie-the-pooh’ pan, which will probably never get used again either.  I think I see donations there.  I am, however, keeping the mini teddy bear cake pan.  Good for single serve cakes and other treats.

One thing I haven’t found yet and hope I will in the last few remaining boxes is my cheesecake pan.  While I don’t bake them often, I can make a mean one and I have a great recipe for a champagne-raspberry sauce to go with it.  And I’ve been craving it lately!

Now, this main chicken dish originally started as a recipe my Mother use to make and that I loved as a kid. I adapted it a bit, as my Mother made rather bland food because that’s how my Dad liked it. My Dad also liked things cooked to dryness, so it was years until I realized that meats and chicken taste better when moist. Yeah, my Mom wasn’t the best cooking teacher.

Oh, and is said often enough elsewhere – read everything before you start. In this particular dinner, I cooked the potatoes and the chicken at the same time. I do my best to time things so that it all comes together at the same time.

Chicken – use what you like, I prefer boneless breasts
Salt
Pepper
Butter – I used half a stick
1 can of Cream of Chicken soup
Milk
Mushrooms – sliced

Again, amounts depend on what you like and how much you want to cook. I used five chicken breasts for dinner, so you have some reference.

Preheat oven to 350°. In a baking dish, lay out chicken that has been cleaned – wash off and trim fat. Sprinkle with salt and pepper (as much as you like.) Cut butter into pats so that you have one on each breast.

Slice up mushrooms and toss on top of chicken. In a seperate bowl, mix can of soup with milk – I use the soup can to measure the milk, so half a can of milk. Once mixed well, pour on top of chicken. That’s it – throw into the oven for roughly 30 minutes – depending on the chicken you use and how well your oven works.  When serving, make sure you add a bit of the sauce from the pan over the chicken along with the mushrooms.

Preheat oven to 350°. In a large enough bowl, toss the potatoes with some oil, salt, pepper, paprika, rosemary, and garlic so that all the potatoes are covered. They’ll probably look reddish due to the paprika, which is what you want.

On a baking sheet, spread out all the potatoes. If need be, spray the sheet first so that they don’t stick. I use a non-stick, so it isn’t necessary. If there is extra oil/seasonings in your bowl, pour that over the potatoes as well. Make sure they are in a single layer, so they cook more evenly. Sprinkle green onions over top. Place pan in oven for approx. 30 minutes. Time here really does depend on the size of the diced potatoes – the smaller they are, the faster they’ll cook. Keep an eye on them.

While the potatoes and chicken are cooking, you can prep your veggies. They only take about 10 minutes to sauté, depending on the size of your slices. In a large sauté pan or wok, heat up your olive oil. Toss the veggies in, dust with salt and pepper, and sauté until the veggies soften up a bit. You want to keep them semi-firm but cooked through. In the last few minutes (3-4) of cooking, sprinkle enough sesame oil over to cover all the veggies and toss.

That’s it! It really is very simple and tasty. The Man loved it, as did I. And I even remembered to take a picture of the final dish … before I ate it all. While I am no expert on kitchen utensils, I do know what I use, what I like, what I want and what I think is useless.

The most important tool(s) for any chef is their knives. It is important to have a good set and not necessarily an expensive one. While I’d love to have a set of professional knives, I’m very happy with my fairly inexpensive Chicago Cutlery set. It included a variety of knives (paring, chef, bread, etc.) and honing steel. Yes, sharpeners are important. I don’t mean those crappy ones you see in tv ads, but a good honing steel and a whetstone. Personal preference perhaps, but will keep your knives sharp longer. Have a friend or professional show you how to use them so you don’t screw up!

Kitchen appliances have come a long way since I was a kid watching my mom cook. Of them all, a good stand mixer is a must if you bake. I love my professional grade Kitchenaid and use it often. There are a few models out there that are pretty good and don’t cost an arm and a leg. Blenders are good to have and I wish I had a really good food processor. That’s my next kitchen investment. There are plenty of smaller gadgets that I’ll be talking about later.

Also, get yourself a GOOD cutting board. And avoid glass ones at all costs – they are bad for your knives, and dull them a lot faster. I tend to avoid wood, mainly because I’m lazy with the necessary upkeep. The thin silicone mats aren’t bad, but I prefer the thick, reversable, polypropylene ones. Don’t bother with the ones that offer “feet” – save yourself the trouble and put a dish towel or wet paper towel under it and it won’t slide around the counter.

Several friends have started theirs and since I’m now slowly learning to be a chef, I thought I’d just toss my hat into the cooking ring.  I’ve always loved cooking and eating.  There are things that I actively dislike (broccoli being one) but I still cook those things for the other people in my life.

I also love to bake and it shows on my waist line.  I’m always up for something new to try, because you never know where your next favorite dish or dessert will come from.